How to interpret DPMO values? 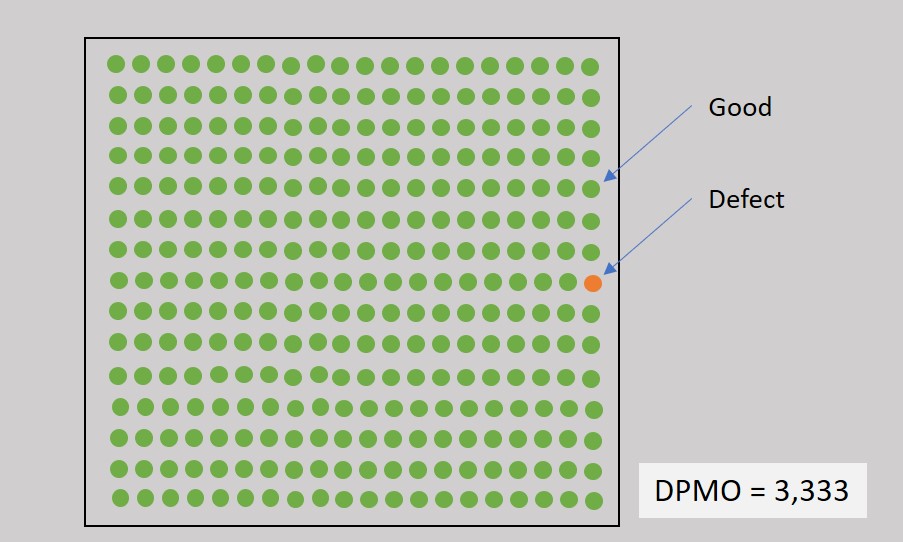 DPMO is a measure of the capability of a process. DPMO number indicates the number of defects observed or expected in a process when there is a possibility (opportunity) to have made a million defects. It is a normalized number so that it is easy to compare processes that may have different opportunities for error (OFE) in each unit. For example, if you want to compare two processes where one process has an OFE of 5 and another process has an OFE of 50 then we could compare the two process DPMO values to see which process is better. Comparing Defect per Unit (DPU) between the two processes would not make sense since each process has an different number of OFE values.

DPMO can be characterised as observed or expected. Observed DPMO is the value that we actually observe based on our data collected. Expected DPMO is based on a probability distribution of the expected number of defects that we would observe if we had run the process for a longer timeframe. DPMO numbers vary from 0 to 1,000,000. The best possible process in the world would have 0 DPMO and the worst possible process in the world would have 1,000,000 DPMO. Larger the value of the DMPO worse is the process.

Observed DPMO can be calculated as follows:

For example, if we have a product which has 20 defects in a week and during that period if there were 100 units manufactured with each unit having 5 opportunities for defects, then the observed DPMO is:

For example, if the data is normally distributed with a mean of 20 and a standard deviation of 1.5 and let’s say that the upper specification limit is 23. Then the expected number of defects can be estimated as the area under the normal probability curve to the right of USL. This area is equal to 0.023 (using Sigma Magic software). Hence, the DPMO is given as under: 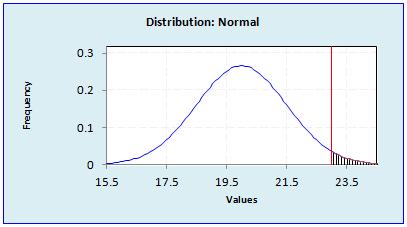 The first problem with the DPMO is that it depends on the number of opportunities for defect per unit. The OFE value may be artificially inflated so that DPMO values can be lowered. There is no clear guideline on what may be classified as an OFE. We need to ensure that what we claim as an OFE is something that is something that the business or the customer truly considers a defect. In order to overcome this problem, we could get a conservative estimate for DPMO by using OFE = 1. A second approach is to only use the DPMO number to compare the before and after performance of a process where the OFE numbers have not been changed. This will provide a relative improvement in the process independent of the OFE values.

The second issue with DPMO is that the observed DPMO may not provide a true indication of the defects in a process. If the samples have been collected only for a short period of time, then there is a possibility that there are zero defects and hence observed DPMO may be zero. This may give a false indication that the process is very good. In fact, this is only observed because we did not have a sufficient sample size. One way to overcome this problem is to use expected DPMO instead of the observed DPMO numbers. The DPMO numbers may also change with respect to the time frame of data collection. Hence, it is important to ensure that we have collected sufficient data to observe a steady state DPMO value (that is the values have converged – assuming the process is stable).

Finally, DPMO numbers should only be estimated from processes that are stable. If the process is not stable, then the DPMO numbers may not have much meaning as the process can change over time and thus the DPMO numbers do not have any predictive value for the future. It only reports what has occurred in the past.
Follow us on LinkedIn to get the latest posts & updates.