What are quartiles and where do we use them? 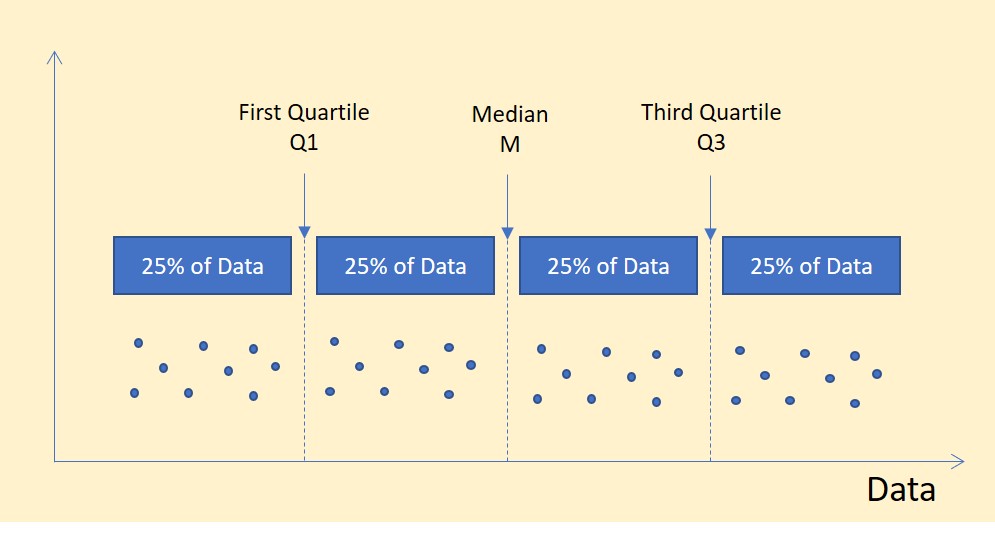 What are the quartiles and what is the Interquartile Range (IQR). How do we calculate these values? Where are they used and why do I need to know about them? In this article, we will understand what they are and how we can calculate them and describe where they are typically used.

Let’s now calculate the IQR value for an example data set. Let’s say we have 11 data points as shown below:

The first step is to put the data in increasing order, we get the following…

How do we handle the case when the number of data points is not divisible by 4! In this case, we have to use interpolation to calculate the value of the quartile. Let’s say we have N = 5 data points, where the data set is as follows:

Some examples of the use of range in the real world are: temperature ranges for the day as reported on a weather report, min/max levels of water in a reservoir. However, in the presence of outliers, the range values can be significantly influenced by them. Hence, we prefer to use the IQR instead as we “ignore” the bottom 25% of the data points and the top 25% of the data points. IQR statistic is more robust with respect to outliers. In the presence of outliers, IQR is a better representation of the amount of spread in the data rather than the range. Some companies use the quartiles to benchmark other companies. For example, the median company pay for a given position is set at the first quartile of the top 20 companies in that region. The quartiles and IQR information is typically used when you create a box-plot of your data set.

Using the Sigma Magic software, calculating the quartiles and IQR is relatively straightforward. Just add a new Basic Statistics template to Excel by clicking on Stat > Basic Statistics. Copy and paste the data for which you want to calculate the quartiles into the input area and then click on Compute Outputs. You could also calculate these values in Excel by using the formula =QUARTILE(C9:C28,1) for the first quartile, =QUARTILE(C9:C28,2) for second quartile, and =QUARTILE(C9:C28,3) for the third quartile. Note that Excel values may not match Sigma Magic and Minitab values as it uses a slightly different algorithm to calculate the quartiles. If you use the Minitab software, you can copy and paste the data into Minitab and then click on Stat > Basic Statistics > Display Descriptive Statistics. Then select the data column and then click on OK. This will print out the quartiles for the sample values. If you want the IQR value, you have to go back to the menu and click on Statistics and select the checkbox next to IQR in the statistics options.

Calculate the quartiles and IQR for the data set given in the following Excel file: Basic Stats 1.

Using the Sigma Magic software, the analysis results will include the quartiles and IQR value. For this example, the first quartile Q1 = 29.25, the second quartile Q2 = 31 (also called the median), and the third quartile Q3 = 32. The Interquartile range IQR = 2.75.
Follow us on LinkedIn to get the latest posts & updates.