What is Sigma Quality Level?

If your data type is continuous and is normally distributed with a single specification limit (let’s say without loss of generality the Upper Specification Limit USL), then the Sigma Level indicates the number of standard deviations (s) that you can fit between the process average (xbar) and the customer defined specification limit. This can be expressed mathematically as follows:

If you know the capability of a process as DPMO number (see previous article on DPMO), then you can compute an equivalent value of Sigma level using the following approach. Divide the DPMO by 1,000,000 to get the area under the curve. The area under the curve is an indication of probability of defects. Use a unit-normal distribution (with mean = 0, and standard deviation = 1) and calculate the Sigma Level that corresponds to this distribution that provides the same defect area to the right. This approach is shown in the following figure.

If you have a bilateral specification, where both the USL and LSL are specified, then the Sigma Level is calculated by first calculating the total DPMO on both sides of the specification limits as follows:

This DPMO value can be translated to the Sigma Level using the methodology described in Section A. This Sigma Level is also called ZBench.

B. Sigma Level for a Non-normal Continuous Distribution 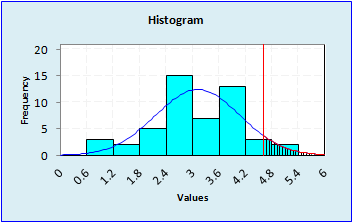 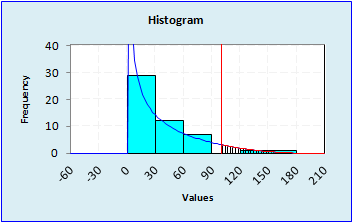 For discrete data, we can also estimate the Sigma Level by first calculating the DPMO and then using the methodology described in section A to calculate the Sigma Level. For example, if the number of defects = 10, number of units = 100 and the Opportunities for error per unit = 5, then DPMO can be calculated as:

In literature, you will find that some people translate between the Short-Term and Long-Term Sigma Level using a 1.5 Sigma Shift assumption. This relationship is usually expressed as: ZST = ZLT + 1.5

The 1.5 number is “pulled” out of thin air without strong statistical foundation. Hence, we recommend that you not use this shift in your calculations. In addition, it is also not clear what period of time can be considered Long-Term. For example, both six months and one year can be considered long term! Not all processes would deteriorate by a Sigma Level of 1.5 (even assuming that on average it drop by 1.5). Instead, we recommend that you calculate the Sigma Level based on the data you have and clarify if your Sigma Level is calculated using Short-Term data or Long-Term data without using the 1.5 shift assumption.

There are several limitations to use of Sigma Level for quantifying the capability of a process. Some of the common problems or issues with use of Sigma Level is listed below:
Follow us on LinkedIn to get the latest posts & updates.